Round Five Preview - What to look for this week

After Avoca defeated Maryborough Rovers last week they sit in seventh position on the ladder and this will be their toughest task for the season when they host the undefeated ladder leader Harcourt.

The Lions may sit at the top of the table but there past two games they had to pull out all stops to get the points over Newstead and Lexton in successive weeks. Both of these games saw the Lions taken to within four goals at the final siren.

Ben Leech is averaging four goals a game and will be a player that Avoca needs to nullify if they are to have any chance of victory, while Brayden Frost is in great form and has been dominating ruck duels to give the Lions first use out of the middle. The match up between Frost and Ryan Kitchin for Avoca will be an interesting duel and could have a significant bearing on the result.

Avoca may also be without Jason Hunt through injury, who has been in very good form for Avoca and he would also be a significant loss for the Bulldogs.

Harcourt has had the better of Avoca over the years having won fifteen of the twenty-four games they have contested and on recent form should be able to make it sixteen wins. But if it all clicks for Avoca on their home ground, then a surprise upset is possible.

Carisbrook’s massive victory over Royal Park last week has added to the mystery of what lies ahead for the Tigers when they tackle the undefeated Trentham this round.

The two hundred and nineteen point massacre was a big surprise to one and all as the Tigers were no match for the Redbacks, and it does not auger well for this weeks encounter with the Saints. Royal Park has been without experienced players Ryan Guareschi and Lauchlan Woodward and are hoping to have these players available for this week’s clash with the Saints.

Trentham are taking all in their path but had to fight tooth and nail in last week’s victory over Navarre, and only managed to come away in the final ten minutes of the game led by a five goal haul in the last quarter to Jake Keogh.

The Saints are a slick fast running unit and have a number of avenues to goal, so it could be another tough day at the office for the Bushy faithful as the Saints are on the charge.

Maldon host the Dunolly Eagles at the Bill Woodfull Reserve, who despite coming off a big loss to Natte Bealiba last week, will be confident of toppling the Bombers if they can put four quarters together.

The Eagles have claimed a couple of scalps this year, and were highly competitive for the first half last week, but fell away in the second half and they will be looking to atone as they face the Bombers who have only lost one game for the season against Navarre in Round two. The Bombers are coming off a strong victory over Campbells Creek last week in the game where Alex Rance made a guest appearance for the Creekers.

The Bombers play their tight ground to perfection with quick entry to their forwards, and Rhys Ford is averaging four goals a game, so will be a tough match up for the Eagles defence. Ash Woodman is another that has been amongst the goals recently, and Hayden Kelly is also known to go forward when necessary.

The Eagles Bailey Goodwin is one player that leads by example for Dunolly as is Bailey Wingrave who is consistently amongst the Eagles better players, while Joel Fisher is the main avenue to goal and he will have his work cut out against the Bombers defence.

The Bombers are favoured to continue their winning run, but an upset is not out of the question.

After winning its last three games in a row by triple figures, Natte Bealiba is gearing up for another big day out this time against Maryborough Rovers.

The Swans are absolutely flying, rebounding off a 37-point loss to Navarre in round one by defeating Royal Park, Campbells Creek and Dunolly by margins of 145, 251 and 115 points respectively.

This a far cry from Rovers who are yet to grab a win, going down to Newstead, Harcourt, Lexton and Avoca in rounds one to four. The Pies put up their best showing of the season thus far on Saturday, with a 10.10 (70) to 20.15 (135) loss to Avoca in a very high intensity game.

Youngsters Marshall Murray and Jack Dawson were Rovers’ stand outs for the day, running with relentless intent as well as Andrew Siekai who was a crucial in for the side kicking four goals. This trio needs to be available this weekend for the Magpies if they are to get their hands on the pill against a mighty Swans roster.

Natte forward Danny Brewster will be on the hunt for another bag this weekend with his current season tally sitting at 42 goals in four games, including a colossal 16 snags against Creek.

Side regulars Trent Mortlock and Zac Mortlock, Josh Grant and Jordi Cossar have all been in fine form and will be ready to rock and roll this Saturday at home.

Newstead’s will want to be up and hopping against Lexton this weekend. The Kangaroos suffered a brutal 114-37 loss to Talbot on Saturday, although admittedly the Roos were sporting a slightly different senior team than usual which could have impacted the way the game panned out.

Joel Smith and Cordie McKendry continued some great form for the Roos despite the score line and they will hope their side is stronger than ever to take on Lexton in round five.

The Tigers head into the game off the back of a moderate 21-point loss to ladder leader Harcourt and are very eager to get back onto the winners’ list with a 2-2 win loss ratio so far this season. Lochy Pett has been great for the Tigers as of late and he plus the likes of Bryce Karslake and Lachlan Rokebrand rose to the challenge at the weekend and will be key in a big win this Saturday.

A victory for Newstead would be a great confidence booster, however it seems unlikely that the side will even get a look in against the Tigers on their home turf.

Campbells Creek’s run doesn’t get any easier this weekend, set to face Carisbrook. The Creekers have had a tough reintroduction to the competition, unfortunately losing to Avoca, Lexton, Natte and more recently Maldon in the opening rounds.

The Maldon damage was lessened by the inclusion of ex-AFL player Alex Rance who headed to the Creek as part of a competition, however it was local legends Nick O’Brien, Sean Moss, Dylan Stevens, Lachlan Hyland and Luke Manning who led votes in a tough game.

These lads will be bracing for impact this weekend at the Redbacks’ web with Carisbrook eager to nab its third win on the trot. Unfortunately for the Magpies, Brook seems to be getting better by the week, registering its best win of the lot on Saturday by 218 points over Royal Park.

The side will be hoping for a repeat in front of a home crowd on Saturday, much to the Pies’ dismay with past leading league goal kickers Anthony Zelencich (14 goals) and Ash Munari (9) out for some big personal tallies.

Lewis Rinaldi, Nicolas Wright and Michael Zelecich were best on in a one-sided game at the weekend suggesting they could be on again this Saturday.

Talbot is still on a high after a cracking win over Newstead on Saturday, however Navarre will hope to bring the Hawks crashing back down to earth this weekend.

After starting the season with big wins over Natte Bealiba and Maldon, the Hoppers have been handed back-to-back losses and will be keen to get back to their winning ways. Navarre lost to Carisbrook in round three and after kicking just two behinds in the first half on Saturday against undefeated Trentham in round four, it was clear that a second loss was on its way.

The Hoppers managed to get two goals in the third and sat just two goals behind at the final change, however the Saints weren’t going to let a dream comeback unfold with the side running out as 48-point victors.

This has only stoked the Grasshoppers’ fire ahead of this weekend at the Hawks’ nest. Talbot finally snatched its first win at the weekend, defeating Newstead by an impressive 77 points with Matt Bond leading the win with eight goals in a best on ground performance.

The Hawks will have to fight hard to keep up with Navarre this weekend, however this victory may have given the side a taste for victory. 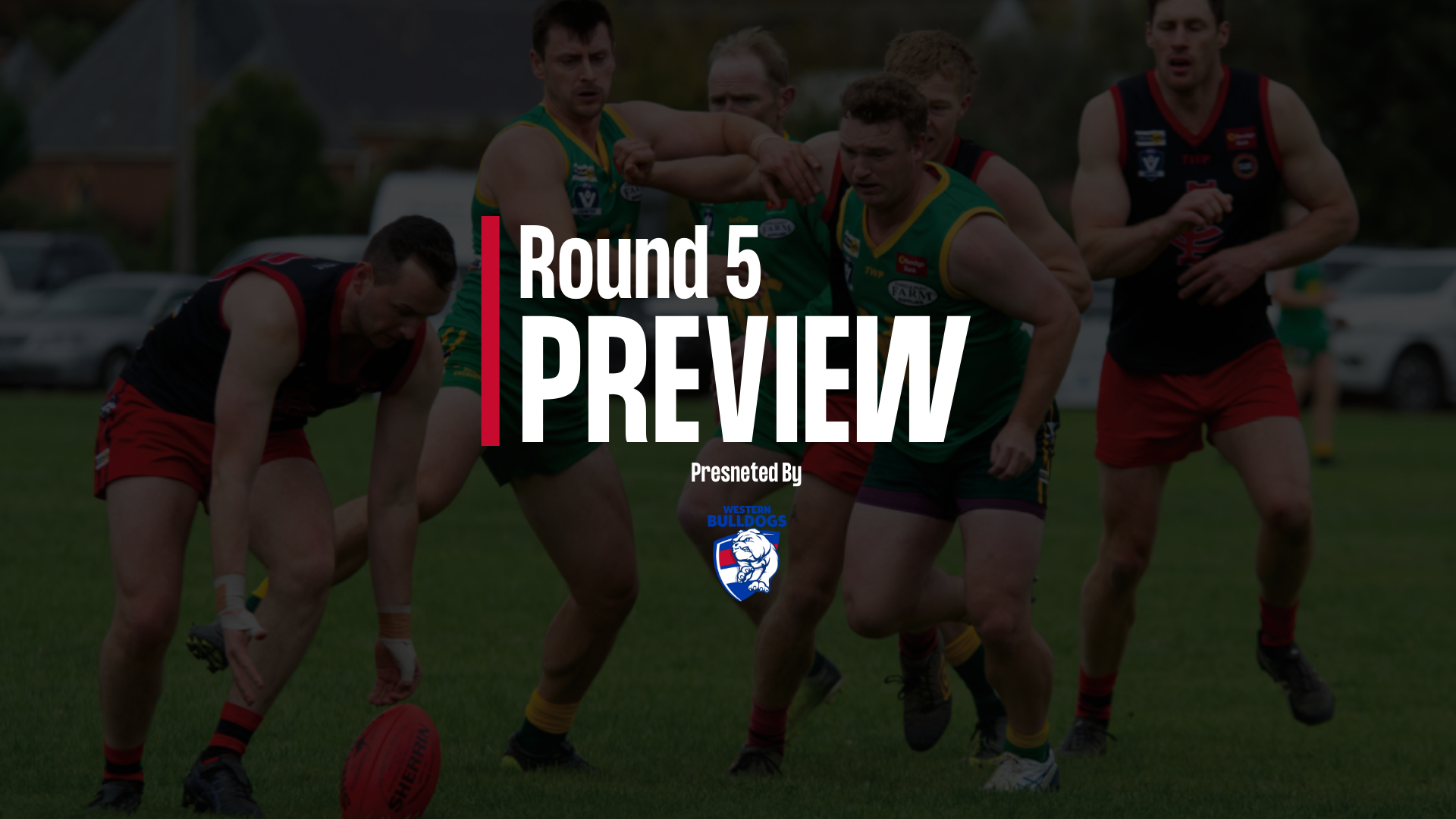